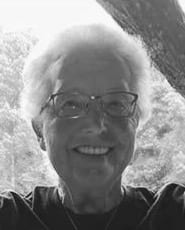 Dorothea (Thea) A. Everett, 84, passed away peacefully on October 20th, 2017 at Tore’s Home in East Flat Rock, NC. Thea was born in Nyack, NY. She graduated from Cortland State in 1954 and received her Masters degree in Physical Therapy from Stanford University in 1956. She worked as a physical therapist in Cleveland Ohio, Smyrna Georgia and Galveston, TX. Thea was given the prestigious Ruby Decker Award, honoring her as an outstanding physical therapist in Texas and for her contribution to the growth of the profession from the Texas Physical Therapy Association. She was a physical therapist for 50 years.

Thea was preceded in death by her life partner of fifty years, the Rev. Deacon JoAnn (Jody) Tomberlin. Thea and Jody joined Madeleine Baker and Jeanette Winfree in owning and working at the Physical Therapy Service in Galveston, TX, from 1983 to 2001. In 2009, Thea and Jody retired to their cabin in the mountains of Zirconia, where they lived until Jody died in 2013. They attended Holy Family Church where Jody was the Deacon until 2013 and Thea sang in the choir until September of 2017. Thea moved to Brookdale Hendersonville East in 2013 and to Tore’s Home in 2017.

Thea is survived by her sister Beth Neven of Mims, FL, and her brother Ed Everett and his wife Barb (Thea’s college roommate) of Clearwater, FL and numerous beloved nephews and nieces and their children, who all adored their Aunt Thea.

Thea served as a Community of Hope Chaplain, a Vestry member of Grace Church and Board Member of the William Temple Episcopal Center in Galveston. She served as a volunteer for the Rescue Mission and the Henderson County Medical Loan Closet in Hendersonville, and a staff member of the Tigg’s Pond Retreat Center in Zirconia, where she co-led Morning Prayer every day for eight years. Thea loved Jesus, her family, her dogs, her friends and the mountains. She was an active scuba diver and birder and avid student of progressive theology. She enjoyed classical and choral music, Taize, Cynthia Clawson and Brother Sun.

The family thanks Drs. Navin Anthony and Benjamin Weinberg at the Cancer Center in Hendersonville, the staff of Brookdale, Tore’s Home and Elizabeth House and Madeleine Baker for their kindness and care. A memorial service for Thea will be held at Holy Family on November 4th at 2 pm. In lieu of flowers, please consider a donation to Holy Family Episcopal Church, 419 Turnpike Rd., Mills River, NC 28755.