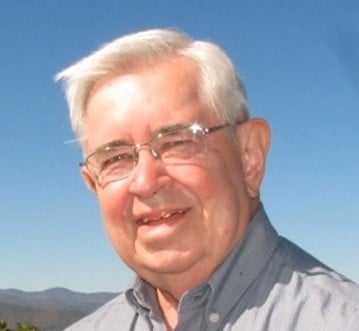 Arland L. MacKinney (Jr.) died on January 14, 2023. He was born on November 29, 1931, in Hendersonville, NC. He was the son of the late Helen Bly Waters who died in 1999 and Arland L. MacKinney (Sr.) who died in an accident in 1938. He was preceded in death by his sister, Anna Elizabeth Lush, who died in 1972. He is survived by his wife of 67 years, Joan; two sons, Jeffrey MacKinney and his wife, Carol, of Morganton, NC; Douglas MacKinney and his husband, Mirek Siedliski of Paris, France; and a daughter, Tamara Lynne MacKinney and her husband, Raymond Janik of Fayetteville, GA; six grandchildren: David MacKinney and his wife Emily of Louisville, KY; Laura (MacKinney) Daley and her husband Jason of Smyrna, GA; and Douglas, Kayla, Kyle, and Ryan MacKinney-Janik, of Fayetteville, GA; and four great-grandchildren: Jackson and Caroline MacKinney, and Kinsley and Leo Daley.

He was the valedictorian of the Hendersonville High School 1949 class and received a Bachelors of Nuclear Engineering from NC State with high honors in 1953. He also received a Master of Science in Physics from Indiana University in 1955 and a Master of Science in Management from MIT’s Sloan School of Management in 1967, where he was a Sloan Fellow.

After three years as a physicist at General Electric’s Knolls Atomic Power Laboratory in Schenectady, NY, he joined Babcock & Wilcox in Lynchburg, VA in 1958, initially doing experimental work on commercial power reactors. He participated in the start-up of several early reactors, including the NS Savannah, a nuclear-powered cargo ship. During his career, he contributed to the development of national nuclear quality standards as a member of a national standards committee and chairman of a sub-committee. He made numerous presentations at national and local meetings of the American Nuclear Society and American Society of Quality Control. After 32 years of technical and management assignments with B&W, he retired in 1990 and joined the staff of the Nuclear Energy Institute in Washington, DC.

In 1996, he and Joan retired to Hendersonville. Since that time, he volunteered for a year at the Carl Sandburg National site and with the AARP Tax-Aide program.  He also served as president of the Middleton Place Residents Association and the Carolina Village Residents Association. He was a member of the First United Methodist Church of Hendersonville, an emeritus member of the American Nuclear Society, and a former member of Senior Friendships of Henderson County. He has helped with several volunteer activities at Carolina Village, his home since 2004.

A Celebration of Life will be held at a later date. In lieu of flowers, a charitable donation in Arland’s name may be made to the Carolina Village Endowment Fund in Hendersonville, NC