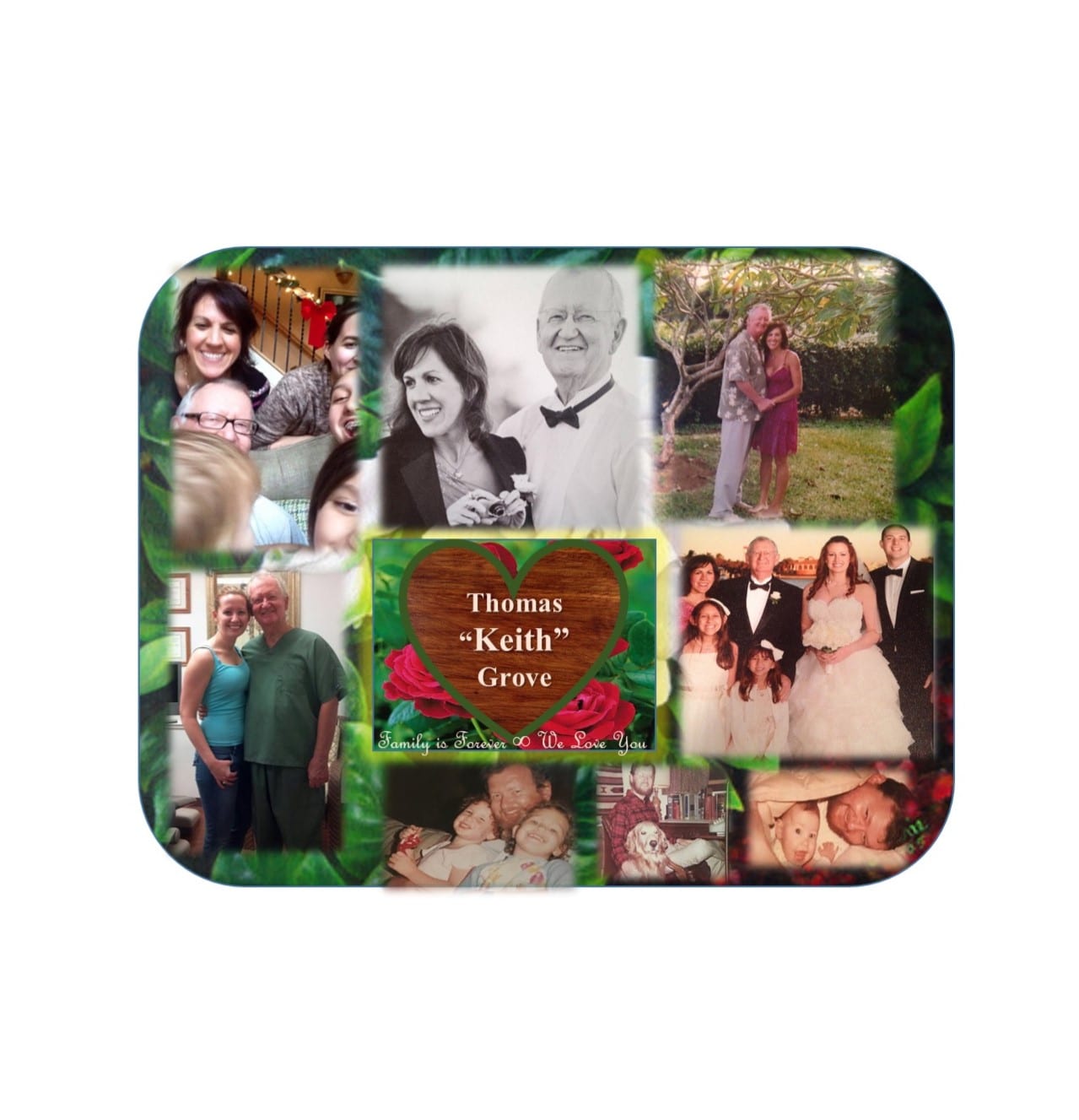 Keith was born in Pittsburgh, Pennsylvania on February 9, 1947 to Thomas (“Tom”) Wesley Grove and Mary “Louise” (Treharne) Grove of Punxsutawney, PA. He grew up moving all around the United States with his parents and his sister Deborah “Debbie” to California, Kansas, and Indiana, while Tom, a former Naval aviator, progressed his career as an executive manager for General Motors. Despite all the moving, Keith kept in touch with a few close childhood friends with whom he was grateful to have maintained lifelong friendship.
Like his father, Keith attended the University of Pennsylvania in Philadelphia, and received his bachelor’s degree in English Literature in 1969. He then pursued a career in dentistry at the University Detroit Mercy, achieving Doctor of Dental Surgery in 1972. From 1972-1973, he practiced dentistry in private practice in Royal Oak, Michigan, while also serving as an instructor at the University of Detroit Mercy. From 1973-1975, he completed his residency in periodontics at the University of Michigan, Ann Arbor.
In 1975, he received a Master of Science in Periodontics from the University of Michigan, and then was an Associate in periodontics in the School of Dental Medicine at the University of Pennsylvania from 1975-1976. He served the Abington, Pennsylvania community specializing as a periodontist from 1974-1980, and also as a consultant in periodontics for Abington Memorial Hospital from 1975-1980. Keith then decided to make his lifelong passion for helping animals a reality, and he returned to the University of Pennsylvania to study Animal Husbandry. This made sense to all, as Keith was a rescuer of horses, cows, dogs, cats and all God’s creatures; someone who would move a worm stranded in the middle of the pavement on a hot day to safe cool grass.

During his veterinary studies, Keith performed extensive veterinary research at Cornell University and in field cases in the Pennsylvania Amish country, working with large animals. He also served the Chadds Ford, Pennsylvania community from 1980-1982. Keith achieved Doctor of Veterinary Medicine at the University of Pennsylvania in 1982. After his graduation, he and his family, including his 8 month old daughter Erin, moved to Vero Beach, Florida where he opened his own private practice in veterinary medicine specializing in dentistry in 1982. Later, he opened his periodontal practice in Vero Beach as well.

Dr. Grove committed himself to serving the community of Vero Beach, Florida with devotion for 27 years through his two medical practices, providing the highest possible care to both humans and animals. “Doc” Grove, as his wonderful team and his human patients called him, was owner and periodontist of the Dental Implant Center of Vero Beach from 8-12AM in the morning, and owner and veterinarian of the Abbey Veterinary Clinic in the afternoon from 1-6PM.

Keith constantly contributed to both fields and his specific areas of expertise: lecturing all over the world, writing and providing supporting authorship of publications and journals, serving as editor of the Detroit Dental Spectrum, doing research on his focus area subjects like feline leukemia, consulting on cases for major corporations like the Iams pets brand of Mars, Inc., the Upjohn Company, Fort Dodge Company, Proctor & Gamble Company, and others, and he supported the Indian River Memorial Hospital.

Keith provided opportunities for students to learn in his practices, and mentored young people still struggling to decide on their career path. He was a diligent and informed doctor who consistently made the effort and personal sacrifice to raise the quality of care for the community, modernizing his practices with the latest equipment for care and comfort to offer the standard for care in Vero Beach, and he underwent additional training each year in his fields and adjacent areas to be prepared and proactive.

Keith met his wife, Kristie, at the Vero Beach Book Center one day when he went in to buy toys for children who were undergoing surgery at his periodontics practice. Kristie was working at the Book Center and also an excellent artist developing her talents at the time. They bonded over her father’s craftsmanship of violins, and even more after hours and hours happily passed sharing experiences of life, spirituality, and soul searching. Their shared loves and growing passion for each other, and their firm foundation of talking and bonding developed as the years went by, and they were married in 2009 in Princeville, Kauai. With their daughters Cristina and Camille, they moved to Hendersonville in 2013 and created a beautiful home and world together and were blessed with many cherished memories.

Keith was a true Renaissance Man, a polymath, and a master craftsman. As his family says, “he can read a book and do anything.” A talented carpenter and lover of music, he had a luthiery shop in the family’s homes for over twenty years where he became a self-taught Spanish classical guitar builder. Keith hand-crafted such beautiful, quality instruments that they achieved the admiration of guitar players around the world. He also built a striking thirteen foot sailboat, and owned a twenty-eight foot catamaran he named Berceuse, both of which he sailed around Florida with his first mate Kristie and his daughters as his crew.

He enjoyed the arts, and taught his family all about opera, classical music, bluegrass, and jazz, and his family knew and loved that if certain songs came on, like the Neville Brothers, James Taylor, the Rolling Stones, Bob Dylan, and Marvin Gaye, he had a dancing style all his own that would put a smile on anyone’s face. He read The Economist every week, and appreciated the works of Shakespeare, J.R.R. Tolkein, Thích Nhất Hạnh, and an extensive list of others. He supported the Embracing Simplicity Hermitage in Asheville and the local men’s group, where he greatly enjoyed the companionship, spiritual and economics discussions amongst the members.

Kristie is going to miss all the adventures that they went on, traveling across the US to Napa, Sonoma, Sedona, the Grand Canyon, Hawaii, the Florida Peninsula, sailing on the catamaran, Vermont, and going to festivals. Keith and his daughter Erin traveled all over the world together, including the United Kingdom, Italy, France, Spain, Bermuda, Canada, the Eastern Caribbean, Morocco, Kenya, Tanzania, Japan, and all throughout China to study different cultures and their unique medical practices, and he traveled to Australia and New Zealand and lectured extensively across the world as an expert in both of his professions.

Keith loved the Earth and nature, and in all his homes he built a multi-seasonal, flourishing garden full of life. Roses were his most passionate creation, and he would always give them to his wife and daughters without occasion. As a winemaker, he produced beautiful shiraz, cabernet, and other varietals from his own grapes, and those he sourced from countries like Australia and Chile. Also a brewmaster, Keith brewed his own contest-winning, delicious beer, including session ales, IPAs, chocolate cherry stouts, ciders, apricot wheat ales, and many others. Keith was also a phenomenal bread baker, serving his family the best sourdough and scones in the world.

Keith was a wonderful pet Dad to Bear, Dan, Bert, Ernie, Parent, Tigger, Sierra, Beau, Sam, Rusty, Jack, and Pumpkin, and Grandad to Max, Morpheus, and Beatrix Kiddo. Not to be forgotten are guinea pigs Petunia, Pinchas Zukerman, Yehudi Menuhin, and Itzhak Perlman, whom Keith named for Erin after the incredible violinist-conductors he educated her about.

As a father, and a person, Keith was an endless giver, who asked for nothing in return. Despite his great achievements, he took care to place no pressure, only his love, in the minds of his children. He was an incredibly strong, proud, devoted family man. A father who never wavered in his commitment to showing his children love, one who embodied the character of Christ’s love for his children – with patience, understanding, and belief in developing hearts and minds. Someone who never stopped trying to soar, to be productive, to provide value. Someone who tried to always see the intricacies and complexities of life and the world – who did not skim situations or people but who looked deeply, carefully, and thoughtfully and considered long and hard all of his political and cultural opinions, and yet did not allow them to settle or dust to gather. He was exceptionally kind.

Most importantly, he loved his family and his great and deep heart shined the most brightly as a husband and a father – his family could always, and can still, look at him and feel loved. He taught his daughters to love like Christ: to put others ahead of themselves, to be kind, to be fierce in their beliefs, to believe in themselves and their intelligence, and, although he has so many achievements, it is this one that he will bless the future generations with. Ever patient, devoted, understanding, and ready to build up, be a shield and a champion, and care for them before himself, he was a wellspring of love and joy that his family will cherish and thank God for the rest of their lives for being so incredibly blessed in this life to know, love, and be loved by this amazing, wondrous man.

Memorial contributions may be made to the American Veterinary Medical Association at 1931 N. Meacham Rd., Suite 100, Schaumburg, IL 60173 or by CLICKING HERE. Prayers for Keith and the family are deeply appreciated.

A memorial service was held 10 July 2016 in the family’s home in Hendersonville.