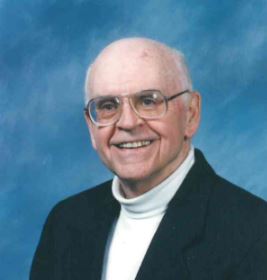 Beloved husband of Romella (Hart) of 32, Edward was originally from Niagara Falls, New York, a son of the late Leo and Leona O’Keefe. A life long educator, he began his career with the Order of the Passionate in preparation for becoming a priest. Known as Brother Walter, as a novitiate, he was in religious training, 1946-1956. He left seminary to continue his education, earning his B.A. from Niagara University, M.A. from Canisius College and Ph.D. in higher education from the State University of New York at Buffalo in 1974. He taught Jr. H.S. students in Niagara Falls and Eggertsville, New York, for over nine years, then became the Placement Director at Niagara University for five years. Returning to teaching, he taught college English and Writing for over 25 years, eventually becoming the Dean of Academic Affairs at Niagara County Community College, and the acting President of that institution for a short period, teaching until his retirement in 1996.

Edward returned to school to become a Myofascial Trigger Point Therapist. Graduating in 1998, he practiced in Buffalo, New York, and Mills River, North Carolina, for 21 years. He was also an ordained non-denominational minster who (along with his wife) served as interim minsters, established chaplain programs, led retreats in three churches and team-taught meditation, dowsing, EFT and Hawaiian spirituality.

For many decades, Edward was a fighter for social justice and environmental concerns, beginning with his involvement in the civil rights movements in the 1960s, mental health associations, educational organizations, churches, and environmental groups. A very spiritual peacemaker, he helped guide many others on their spiritual journeys and volunteered as a suicide hotline operator and as a mediator for dispute resolution. He was an avid reader of social justice, environmental issues, philosophy, religion and spiritual practice, and his spiritual searching and teachings  culminated in writing poetry and a book titled Take It from the Top: What to Do with a Peak Experience, published in 2012. Edward also wrote a monthly environmental newsletter until May 2022.

A celebration of Edward’s life will be held at First Congregational Church of Hendersonville, North Carolina, on August 20, 2022, at 1:30 in the afternoon. A second celebration of life will occur in Western New York on a date to be announced.

In lieu of flowers, plant a tree, contribute to the memorial fund at First Congregational Church or to your favorite charity.

I am being asked to let go of yesterday’s sweetness.

Yesterday’s way of looking at the world and coping with it.

I am reluctant because yesterday was so much better than last week.

I was finally comfortable with myself as I intersect the world.

Now that is to be swept away in great dry heat-

I am to breathe into the moment as I let go the past,

Not only the distant past, but even the earlier today.

Behold, I make all things new