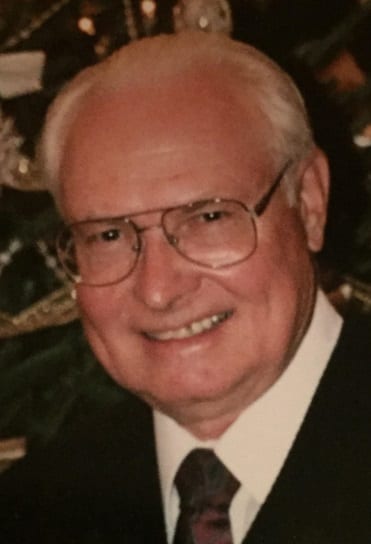 James Aloysius Mulka, 83, of Cummings Cove, Hendersonville, NC passed when a rapid neurological disease guided him to our Lord on Christmas Day, December 25, 2016.

James Mulka was born on Feb 6th, 1933 in Rogers City, Michigan the oldest son of Eli and Blanche Mulka. After High School he worked for U.S. Steel on the Great Lakes limestone freighters; achieving the rank of 3rd Class Engineer.

In the fall of 1950 he saw, “My Gal Sal” walking down the streets in Rogers City. Two weeks later he found Sally (Salomea) Wozniak, again on a Posen dance floor and they began their dance of life. James and Sally were married October 30th 1954. 62 years later that love has never been stronger.

James decided the long months at sea were no way to raise a family and told his father he was going to college to be an Engineer. James and Sally started their new family at Michigan Technological University and he graduated in 3 ½ years with his Bachelor of Science in Mechanical Engineering in 1959. James was the first Mulka to attend college.

His distinguished engineering career began in Jackson, MI designing power plants for Commonwealth Associates. Two years later, he joined Dow Corning Corporation in Midland, Michigan where he worked as a Project Manager for 35 years which included a 5 year foreign assignment in Brussels, Belgium before retiring in 1995. Afterwards, James and Sally found the beauty of the North Carolina Mountains to call home. The DC4 Research Building was James’ engineering legacy and stands tall overlooking the Dow Corning Corporate site.

He followed St. Joseph both spiritually and in his love for carpentry. He designed and built his family summer home in Michigan and upon retirement, he completed a lower level living area for his own home and for many friends in the Cummings Cove community in Hendersonville, NC. His attention to the smallest details and meticulous craftsmanship radiates from every project he built for family and friends.

James is survived by his loving wife Sally, his children and spouses, Mark, Steven & (Tanya), Scott & (Sally), Kristine & (David) Olson and (Erin). Preceding him in death was his son Jeffrey. He brought joy to his grandchildren; Cameron, Nicholas, Angela, Dylan, James John, Alexander, Blake and Grayson and great grandchild Tess, with countless wooden projects he lovingly built for their use and play.

James memory will live on with his brothers and sisters: Michael, Susie, Sally Jean, Tony, and Beth on the Mulka side and Anita, Rev. Anthony, and the nuns, Sister Lois and Tereska, from the Wozniak side of the family; also numerous nieces and nephews.

The funeral Mass for James will be held at Immaculate Conception Church in Hendersonville, NC on Friday December 30th 2016 at 2:00 pm.

Those interested may make a donation in the name of James A. Mulka to Michigan United Conservation Clubs, 2101 Wood St. Lansing, MI 48912 or at www.mucc.org, the Immaculata Catholic School, 711 N. Buncombe St. Hendersonville, NC 28791 or the Hendersonville Rescue Mission, 639 Maple St, Hendersonville, NC. 28793 or at www.hendersonvillerescuemission.com.