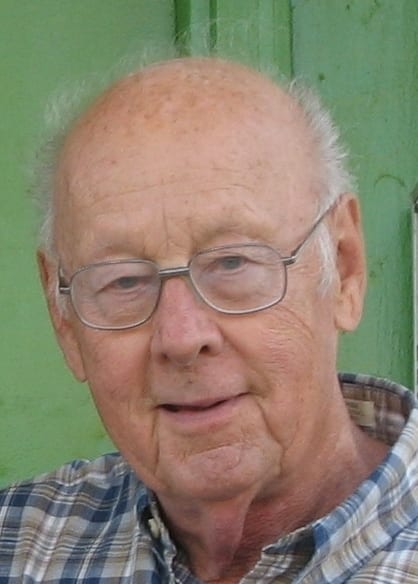 Leo Walter Blumer was born to Walter and Mae Blumer on May 26, 1926 in Hancock County, Iowa, and died on November 22, 2011 at Elizabeth House in Flat Rock, North Carolina under the loving care of Four Seasons Hospice.

Leo grew up on a farm near Klemme, Iowa and graduated from Klemme High School. He briefly attended Waldorf College in Forest City, where he met his wife, Dixie. Leo served in the Navy for two years and then attended Iowa State University, graduating with a degree in electrical engineering. Upon graduation, he was employed by Northwestern Bell, beginning a 35 year career with the Bell System. He retired in 1984 and he and Dixie moved to Henderson County, North Carolina in 1986 to spend their retirement years.

Leo loved to play golf and bridge, and he and Dixie spent many, many days hiking in the beautiful North Carolina mountains. He also enjoyed the time he spent building homes with Habitat for Humanity. Travels took Leo and Dixie to many foreign counties and throughout the US, with western and southwestern United States being special destinations.

Shuler Funeral Home in Hendersonville is assisting with arrangements and will accept condolences on behalf of the family at 125 Orrs Camp Road, Hendersonville, NC 28792 or shulerfuneralhome.com. In lieu of flowers, memorials may be directed to Friends of DuPont Forest at PO Box 2107, Brevard, NC 28712, Four Seasons Hospice at 571 S. Allen Road, Flat Rock NC 28731, or to the charity of donorís choice.

The memorial service will be held in the Midwest at a later date.