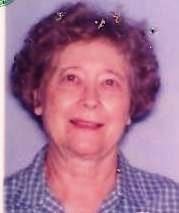 Born in Montgomery, AL, she was the daughter of the late Oland and Maggie Mae Thomas Avant. She was also preceded in death by her daughter, Elizabeth Lee Shirley and sister, Reba Avant Perry.

Before moving to Columbus, she had resided in Montgomery, AL, Jekyll Island, GA, and St. Marys, GA. Before retiring, Mrs. Shirley was employed by the US Post Office and by the US Air Force as a civilian employee at Maxwell AF Base and Gunter AF Base, both in Montgomery, AL.

She enjoyed gardening, sewing, playing Mahjong, and traveling and was a member of Columbus United Methodist Church.

A memorial service will be held at 11 am Monday, December 23, 2013 at Tryon Estates. The Reverend Rob Parsons will officiate.

Memorials may be made to Hospice of the Carolina Foothills, 130 Forest Glen Road, Columbus, NC 28722.