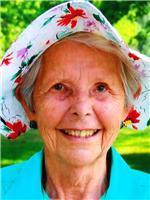 Margaret Ruth Starrett Bridges Ramsdell, 94, went home to be with her Lord on June 17, 2014 surrounded by her family and friends in Hendersonville NC.

Visitation was from 6:00 p.m. to 8:00 p.m. on Friday, June 20, 2014, at McKneely Funeral Home in Kentwood, LA. A Visitation was also offered on Saturday, June 21, 2014 at the Tangipahoa Baptist Church, Tangipahoa LA at 10:00 a.m., followed by a Celebration of Life Service at 11:00 a.m. there in the Sanctuary. It was officiated by the Rev. Greg Stewart, Host Pastor and Rev. Larry Stringfield of Prattville, AL. Interment followed in Tangipahoa Cemetery, Tangipahoa.

Margaret was born in Progress MS on January 4, 1920 to Arthur and Lillian Starrett. She was one of four children, a graduate of the University of Southern Mississippi, and served for a brief time as a County Home Demonstration Agent in Mississippi and later taught at the Kentwood High School in Kentwood LA.

She worked over 40 years beside her husband, Dalton, at their grocery store in Tangipahoa. She was an active member of the Tangipahoa Baptist Church over those years and was later active in other churches where she later resided. She was a member of the Kentwood Chapter of Eastern Star, the Kentwood Music Club and the Garden Club.

She was preceded in death by Dalton Bridges, her first husband of 44 years; and her second husband, Gordon Ramsdall of Surry ME; her three brothers, Arthur, Melvin, and William (Billy); and one step grandchild, Hugh Violette.

The family wishes to extend a special thank you to Sunnybrook Assisted Living in Hendersonville, NC that cared so lovingly for the past six years and to Four Seasons Hospice during her final months.

In lieu of flowers, memorials may be made to a charity of the donor’s choice.