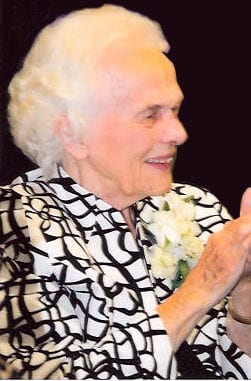 Mary Sue Mullinax Davis, 94, of Hendersonville died Thursday, March 23, 2017, at the Elizabeth House in Flat Rock.
Born in Greenville, SC and a graduate of Parker High School, she earned her nursing diploma in Fletcher at Mountain Sanitarium.
She married Pastor Herman E. Davis in 1943. They served as Seventh-day Adventist missionaries in Ethiopia for 11 years, where their 1st two children were born. After returning to the U.S., they pastored churches in both South and North Carolina.
Sue’s 60 year career included her role as a minister’s wife and private duty registered nurse while raising their four children.
She was preceded in death by her husband of 64 years and her two brothers, Aaron and Doyle Mullinax.
She is survived by her 4 children, Mary Jo of Hendersonville, Gene of Tampa, FL, Suzanne of Chattanooga, TN and Suzette of Newport Beach, CA; her brother, a retired pharmacist from MUSC, Joseph L. Mullinax; six grandchildren, Chrissy Barrett of Apopka, FL, Jessica and Geoff Davis of Clearwater FL, Veronica, Thomas and William Hayes of Chattanooga, TN; two great grandchildren, Zachery and Owen Barrett of Apopka, FL
Along with being a devoted child of God, Sue’s talents were many. She was an artist, an accomplished seamstress, an absolute green thumb gardener. Music was engrained in her soul and she shared that passion with her children.
Memorials may be made to Four Seasons Compassion for Life, 571 S. Allen Road, Flat Rock, NC 28731 or by clicking here.