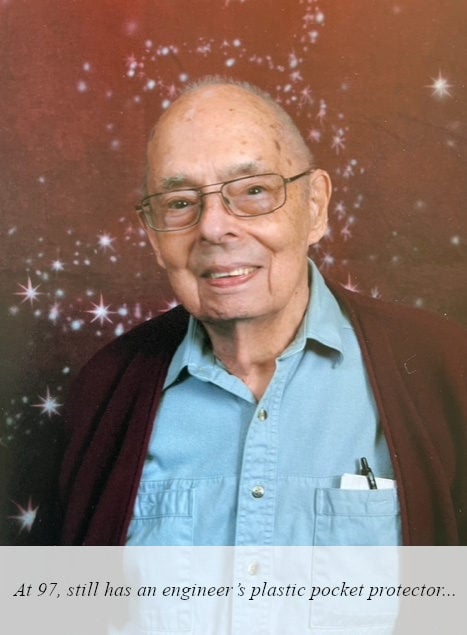 Reagan Houston, died peacefully in his sleep on October 13, 2022.  He almost made it to his 100th birthday on Christmas Day this year.
He taught me the importance of family, the Scouting rule to “leave the campsite better than the way you found it,” and a strong faith in something bigger than ourselves.  He modeled his belief in the benefits of laughter, especially at himself, and, well known for his puns, he enjoyed the groans they elicited. Committed to personal learning, he shared his belief in the use of vitamins to heal the body well into his mid-90s.
Sheltering in place revealed his dementia. Even as he lost many of his capacities, he never lost his kind, gentle manner, his sense of humor, his desire to help, and his faith in his God. In my mind, he is now eating ice cream with my mom who has been staffing Heaven’s Welcome Table since 2012.
With much love and gratitude,
Lynn Houston Baskett

Reagan was a professional chemical engineer with 18 registered patents on air purification. He worked for Linde Air Products, a Division of Union Carbide in Buffalo NY, BF Goodrich in Avon Lake, Ohio, and helped start Aztec Chemicals in Elyria, Ohio. He loved his family (I doubt he ever missed the wedding of any family member) camping, travel, good friends, good stories, playing, and fixing anything and everything. His optimism is in my DNA, and it has made my life full of wonder.
A memorial service will be held at First United Methodist Church, Hendersonville, NC at a future date. Please subscribe to this website for updates.

Please share your memories of Dad on the Shuler Funeral Home website. They will be gratefully treasured and re-read often.

You can honor Dad by taking your Vitamin C daily and donating to Four Seasons Hospice or a community organization that supports low-income, vulnerable or marginalized communities.