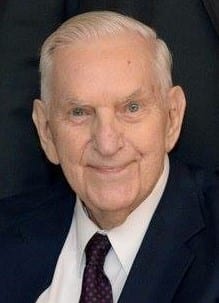 Born in Brooklyn, NY, he was the son of the late Francis and Sonja Lind Whelehan.  He was also preceded in death by his sons, Robert and Mark.  Before moving to Hendersonville 21 years ago, he had resided in Greensboro and Hicksville, NY.

Bob was a veteran of the US Navy, serving as Aviation Electronics Technician, 2nd class.  He received his Bachelor of Science degree in Electrical Engineering from Brooklyn Polytechnic.  Bob was employed by Grumman Aerospace Corporation as an electrical engineer for over 30 years before retiring in 1993.  During his employment, one of his most rewarding projects was his work on the Apollo Lunar Module.

Bob is survived by his wife of 60 years, Eileen Gilmartin Whelehan; his daughters, Mary Ellen, Eileen and Lisa; his son, Brian; grandsons, Robert, Scott and Brandon; granddaughters, Kathleen, Kelly, and Sadie; and his sister, Veronica.