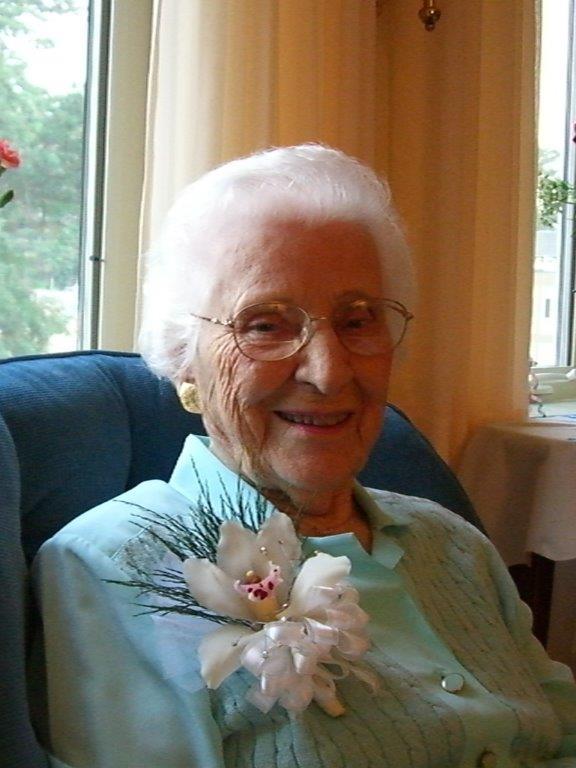 Eileen Dawe passed away April 1, 2014. Born on June 7, 1913, in Brooklyn, N.Y., she was the daughter of Neville Boughton and Lilian Head, who immigrated from Great Britain in 1910. She was the wife of the late Donald C. Williams (dec. 1985); they moved to Hendersonville in 1977. Her second husband was Harold J. Dawe (dec.2004). She was the sister of Marjorie Link and Jack Boughton, who also preceded her in death.

She is survived by her son, Roger Neville Williams, and her nieces Judith Keating, Barbara Schimer and nephew Fred Link, as well as niece Linda Doan and nephews Robert and Roy Williams and step-nephews, Randy and Kim Boughton.

Eileen (she went by her middle name all her life) was a charter member of Pine Crest Presbyterian Church in Flat Rock. She graduated from Brush High School in South Euclid, Ohio, and married her high school sweetheart, Don, after he graduated from Fenn College (Cleveland State).

The young couple moved to Muncie, Indiana, where Don worked for the Ball Corporation, and where they adopted their son, Roger. Moving back to Cleveland after the war, Don took a lifelong job at Addressograph-Multigraph, and the family settled first in Maple Heights, then moved to Mentor, Ohio. The whole family went to England in 1953 to visit Eileen’s relatives, with whom she remained close throughout her life. In 1954 they adopted a daughter, Janet Susan, who died in 1989.

A later move took the family to Chardon, in Geauga County, where her children attended public school. Don bought a 1828 farmhouse and proceeded to renovate it with the help of Eileen who took a keen interest in the restoration, researched its history, and decorated the historic home. Eileen and Don were active in the Chardon Methodist Church where Eileen taught Sunday school.

In retirement, the couple moved to Chagrin Falls, Ohio, followed by a relocation to Flat Rock, North Carolina. After Don passed, Eileen moved into Carolina Village, where she later met and married Harold Dawe. The couple enjoyed ten years together.

Eileen was an active church member and also worked part time at the Hendersonville Visitor’s Center, while volunteering at Pardee Hospital. She remained an active hiker, climbing Mt. Pisgah and hiking in the Swiss Alps at age 80. She travelled to England and Wales several times, visiting English relatives. In her youth, she loved travel, sailing, picnicking, cooking and raising her family.