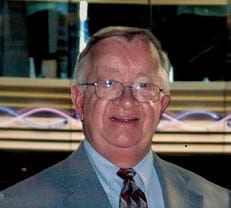 William Joseph”Bill” Reiff, 85, of Hendersonville, NC passed away peacefully in his sleep Sunday, August 12, 2018 after an extended illness. Bill was born in Dubuque, Iowa on March 3, 1933 to the late William Peter and Louise Hesselmann Reiff. He was also preceded in death by his siblings, Richard “Dick”, Louie, and Louise Waechter. He graduated from St. Ambrose Academy in Davenport, Iowa in 1951. Bill worked at the Quad City Times, first as a paper boy, then a pressman, eventually becoming pressroom manager.
He married the love of his life, Ann Blackledge on April 18, 1964. This loving couple spent fifty-four years raising three children and enjoying their time together. They moved to Omaha, Nebraska in 1985 and then to North Carolina in 2014.
Bill is survived by his loving wife, Ann; their three children, David (Teri Watkins) of Hendersonville, NC, Marc Reiff of Columbus, OH, and Judi (Sylvain Bernard) of San Diego, CA. Bill enjoyed his grandchildren, Carlee and Lauren Reiff, Anais, Josephine and Hugo Bernard, as well as his numerous nieces and nephews.
A celebration of Life will be held at 10:30 am Saturday, September 1, 2018 at Weertz Funeral Home on Jersey Ridge Road, Davenport, Iowa. The family will receive friends from 9:00 am to 10:30 am prior to the service. Burial will follow at 11:30 am in the Mount Calvary Catholic Cemetery in Davenport.
In lieu of flowers, memorials may be made in Bill’s name to the donor’s favorite charity.